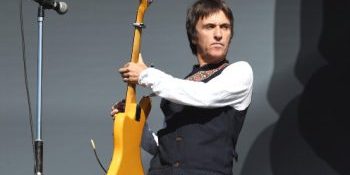 Johnny Marr and Andy Rourke are taking their reunion from the live stage to the studio.

Following their joint performance in New York City back in September, the former The Smiths bandmates have released a new song together. The tune, titled “Strong Forever,” was recorded with Rourke’s band Blitz Vega and marks the first time he and Marr have played together on a recording since The Smiths broke up in 1987.

“I wanted [for the song] exactly what Johnny does,” Rourke tells Rolling Stone. “He has a very distinctive sound, and that’s what he did. We love what he brought to the track.”

Rourke notes that he and Marr have “remained friends” over the years.

“We’ve known each other since we were 13 years old,” Rourke says. “[Marr’s] my oldest and dearest friend and I feel our friendship gets stronger as time passes.”

Of course, such is not the case with every member of The Smiths: Marr and frontman Morrissey have long been estranged.