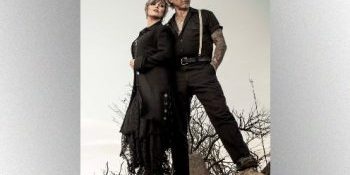 Newly inducted Rock & Roll Hall of Famers Pat Benatar and Neil Giraldo have made some new plans for next year. They are set to open dates on Pink’s newly announced Summer Carnival Tour.

Until then, Benatar and Giraldo have another exciting project about to launch. Their new show, INVINCIBLE – The Musical, a modern reimagining of Romeo & Juliet featuring their catalog of music, is set to have its world premiere November 22 at The Wallis Annenberg Center for the Performing Arts in Beverly Hills, California. And fans can get a taste of what to expect when the rockers appear Tuesday on The Late Show with James Corden. In addition to chatting with the host, they’ll join members of the show’s cast to perform a special rendition of Benatar’s classic “Heartbreaker.”

Fans can also catch them being inducted into the Rock & Roll Hall of Fame when the induction ceremony, held earlier this month in Los Angeles, airs November 19 on HBO and streams on HBO Max.