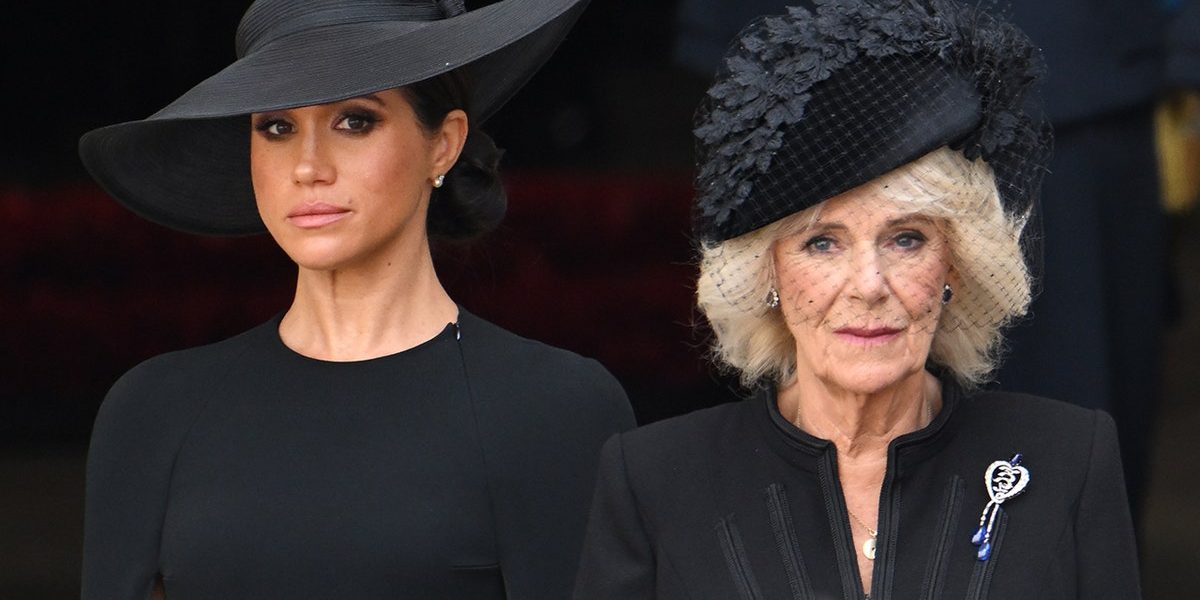 Meghan Markle was allegedly “unresponsive” to Queen Consort Camilla’s advice when she first joined “The Firm.”

The claim was made by royal author Angela Levin, who has written a new biography on the wife of King Charles III, due out Sept. 29, titled “Camilla: From Outcast to Queen Consort.” The author spoke to many of Camilla’s pals, staff and former colleagues, as well as other palace insiders to tell the story of how she became one of the key members of the British royal family.

Levin first meet the now-Queen Consort in 2015. In 2018, she wrote a book titled “Harry: A Biography of a Prince,” which was based on her exclusive conversations with the 38-year-old before his marriage to Markle.

“Camilla warmly greeted Meghan when she came to London,” Levin wrote in an excerpt published by The Telegraph on Thursday. “Prince Charles enjoyed talking to her, especially about the theatre and arts. Camilla felt the experience she had from coping with public abuse, press insults and frostiness from the Royal family put her in a good place to help Meghan adjust to the restrictions of royal life and was equally keen to help Meghan find her feet.”

“They had lunches together, and Camilla spent a lot of time offering advice on how to handle the pressure,” Levin shared. “She tried to be supportive, was happy to be her mentor and took her out for private lunches. A source at the time told me: ‘She doesn’t want to see anyone struggling, and she is fond of Meghan.’ Meghan, however, seemed bored, was unresponsive and preferred to go her own way, with the result that the Queen Consort’s advice landed on stony ground.”

Levin alleged it wasn’t the first time Camilla attempted to show the Duchess of Sussex her support after she married her stepson in May 2018.

“Meghan had a reputation for being a hard worker,” Levin wrote. “Her first solo project since joining the Royal family was contributing to ‘Together: Our Community Cookbook,’ showcasing more than 50 recipes from women from the Grenfell community, published a year after the Grenfell Tower fire of 2017.”

“The Queen Consort and King Charles wanted to show their support and invited the Duke and Duchess of Sussex, plus their friend Lucia Santa Cruz, to lunch at Highgrove,” Levin continued. “Lucia recalls: ‘As a surprise, Camilla went out of her way to make sure the lunch consisted only of recipes from Meghan’s cookbook, and that included a very hot salsa. It was a really nice gesture.’ One that made no impact.”

Levin claimed that “it was a shock” for Camilla after the Duke and Duchess of Sussex announced they were stepping back as senior royals in 2020. However, she “avoided talking about it” publicly and instead, chose to focus on supporting her husband.

The Duke and Duchess of Sussex reside in California with their two children. Following the move, Levin alleged that Harry’s relationship with Camilla has become strained.

She wrote: “A reliable source has told me that Prince Harry has recently been very negative about Camilla, but believes it ‘could be part of his therapy process to relive certain things, and he may want to blame someone else for his own mistakes. As I understand it, his father and stepmother have become hateful in his mind. I’ve also been told that Meghan has been horrible about her, too.’

“Another source added: ‘What has happened and how [Prince Harry] has behaved has been very upsetting for her. There have been a lot of hurt feelings all around, but like all families, you have to embrace it all and hope it will improve.'”

According to Levin, America plays a significant role in the future of the monarchy — and not just because the Sussexes live there.

“My source added, ‘The Sussexes are more liked in America than in the U.K., which can damage not only Charles and Camilla but the whole monarchy,” wrote Levin. “’The American issue has to be dealt with. The Cambridges have to go to the U.S. to show who the real stars are. As will the Queen Consort and King Charles.”

Royal commentator Hilary Fordwich told Fox News Digital that Camilla could identify with Markle’s struggles in the public eye. As a result, she reportedly wanted to offer a helping hand.

“Having been an outsider and having endured intense media scrutiny herself, Camilla tried initially to be immensely supportive of Meghan,” said Fordwich. “According to many in their orbit, ‘Meghan seemed bored’ with all the advice and preferred to ‘do things her own way.’ She neither heeded advice proffered nor followed protocol patterns provided for her.”

Fordwich also pointed out that Harry previously acknowledged how happy Camilla made his father.

“Back in 2005, Prince Harry was quoted as saying, ‘She’s a wonderful woman, and she’s made our father very, very happy … William and I love her to bits,'” she said. “His attitude towards her has certainly soured over the years and hasn’t contributed to his relationship with his father.”

Markle, a former American actress, became the Duchess of Sussex when she married the British prince.

The couple welcomed a son named Archie Harrison Mountbatten-Windsor in 2019. The Duke and Duchess of Sussex’s departures from royal duties began in 2020 over what they described as the British media’s intrusions and racist attitudes toward the former “Suits” star, 41. The family now reside in the coastal city of Montecito, California.

In the wake of quitting royal duties, they gave an explosive TV interview to Oprah Winfrey in March 2021, in which the couple described painful comments about how dark Archie’s skin might be, before his birth. The duchess talked about the intense isolation she felt inside the royal family that had led her to contemplate suicide. Buckingham Palace said the allegations of racism made by the couple were “concerning” and would be addressed privately.

In June of that year, they welcomed their second child, a daughter named Lilibet “Lili” Diana Mountbatten-Windsor.

It took years for many in Britain to forgive Charles, 73, whose admitted infidelity and longtime links to Camilla, 75, torpedoed his marriage to Diana, known as “the People’s Princess.” The glamorous young mother of Princes William and Harry died in a Paris car crash in 1997, five years after her messy, public split from Charles.

But the public mood has softened since Charles married Camilla Parker Bowles in 2005. Since then, Camilla has taken on roles at more than 100 charities, focusing on a wide range of issues including promoting literacy, supporting victims of domestic violence and helping the elderly.

CAN WE TALK? HOW MEGHAN’S REQUEST TO KING CHARLES HAS FARED SO FAR: ROYAL EXPERT

With a down-to-Earth style and sense of humor, she eventually won over many Britons. Her warmth softened Charles’ stuffy image and made him appear more relaxed, if not happier, as he visited houses of worship, unveiled plaques and waited for his chance to reign.

The monarch passed away Sept. 8 at Balmoral Castle in Scotland. She was 96.

‘Hocus Pocus 2’ just released on Disney+ and a ‘Hocus Pocus’ Broadway musical could be next
September 30, 2022