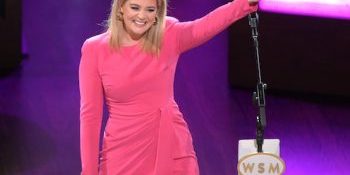 Lauren Alaina recently got engaged to her boyfriend Cam Arnold, and she picked a special spot to share the news with fans.

The singer — who has been a Grand Ole Opry member since February — appeared onstage for her Saturday night performance with a brand new ring on her finger. “I was welcomed into this family and it was a dream of mine as long as I can remember,” she told the crowd, speaking about her Opry membership.

“I didn’t think this year could get any better, [but Friday] I got asked into another family!” the singer continued, according to People. “After he proposed to me, I said, ‘You have to come out on this stage at the Grand Ole Opry.’”

And come out he did: Cam, who Lauren has been dating for two and a half years, joined her onstage to officially meet her country music family.

“Everybody, this is my fiancé,” Lauren announced. “…Make some noise for my future husband, everybody!”

Cam is a partner in a Nashville-based insurance firm, and according to People, he typically prefers to keep his life fairly private, so the couple have stayed largely out of the spotlight for most of their relationship. For their engagement, however, Cam made an exception.

Carly Pearce shares some snapshots as she starts her next record: “I can’t wait to share where I am”
November 18, 2022