Lainey Wilson shouts out “the things that make my world go ‘round” in her new song, “Live Off” 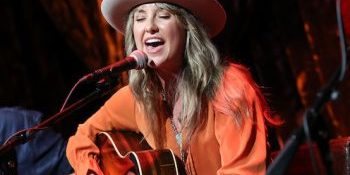 It’s a tune that’s particularly special to her, the singer shared on Twitter. “[‘Live Off’] is all about the things that make my world go ‘round,” Lainey explains. “My hometown, my dog, my family, my friends.”

A twangy, midtempo anthem, the song’s story is structured around all the things Lainey “lives off.” Even more important than food or money, she sings, is the place where she comes from and the people (and pets) she shares her life with.

Bell Bottom Country is due out on October 28 and features other previously released songs like “Heart Like a Truck” and “Watermelon Moonshine.”

It’s also got a song called “Those Boots (Deddy’s Song,)” a track that’s extra meaningful in light of the health problems that Lainey’s father has faced. When her dad was hospitalized recently, the singer canceled a couple of shows and opened up with fans about her close relationship with him as she requested their prayers.

Lainey is also a featured vocalist on the newest single from Hardy, a grisly story song called “Wait in the Truck.”

The post Lainey Wilson shouts out “the things that make my world go ‘round” in her new song, “Live Off” appeared first on Regional Media News.

Nashville notes: It’s all “Water Under the Bridge” for Sam Hunt, plus a new ‘Yellowstone’ trailer
September 29, 2022

Maren Morris explains why she speaks up to support trans youth: “Country music is for everyone”
September 29, 2022