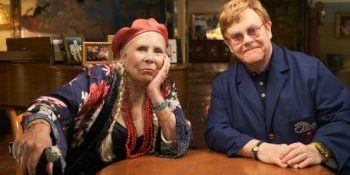 Earlier this year, Joni Mitchell was a surprise guest at the Newport Folk Festival, where she performed her first full set of songs in concert in more than 20 years. Fans may soon be able to relive that performance in the form of a live album.

Mitchell sat down with Elton John last weekend for his Rocket Hour radio show on Apple Music 1, and during the chat, Elton mentioned that there’s going to be an album coming out documenting that performance. Mitchell confirmed the news, responding, “We’re trying to put that out.”

During the concert, Mitchell joined superfan Brandi Carlile onstage and sang along with her for most of the 13-song set, which included classics like “Both Sides Now,” “Big Yellow Taxi” and “The Circle Game.”

“It’s extraordinary how good it is,” Elton added. “And you didn’t have much rehearsal, did you?”

“Didn’t have any,” the legendary singer/songwriter replied. She then noted that she was unable to sing in her original key, since she’s now an alto, not a soprano. However, “I thought people might feel slighted if I just played the guitar part … so it was very well received, much to my delight.”

Mitchell also spoke with Elton about getting a lot of flak for her now-classic albums like Blue, Court and Spark, Ladies of the Canyon and The Hissing of Summer Lawns.

“People thought that it was too intimate,” she explained. “It was almost like Dylan going electric. I think it upset the male singer-songwriters. They’d go, ‘Oh, no. Do we have to bear our souls like this now?’ I think it made people nervous … It took to this generation, they seem to be able to face those emotions more easily than my generation.”