GAYLE to perform at the 2023 AT&T Playoff Playlist Live! 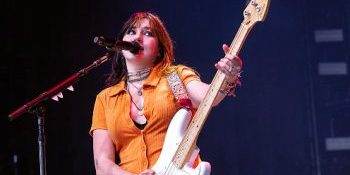 The “abcdefu” artist is set to perform at the 2023 AT&T Playoff Playlist Live!, which will be held in Los Angeles ahead of next year’s College Football Playoff National Championship. She’ll take the stage at LA’s Banc of California Stadium on January 8; the game takes place January 9 at SoFi Stadium.

Tickets to the concert will be free, but you need to pre-register to attend. You can also watch it streaming via the ESPN app. For more info, visit CollegeFootballPlayoff.com.

GAYLE had named her U.S. headlining tour the Avoiding College tour, though the outing was eventually canceled.

“I’m learning how to be an adult and how best to do this new life,” she said at the time, adding, “I’m still definitely not going to college.”

As for some things GAYLE won’t be avoiding in 2023, that includes the Grammys, where “abcdefu” is nominated for Song of the Year, and Taylor Swift‘s stadium tour, which she’ll be opening for on select dates.