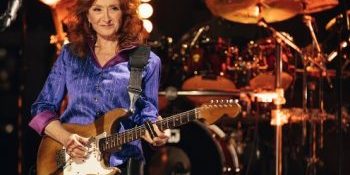 Bonnie Raitt is extending her time on the road. The Rock & Roll Hall of Famer just announced her Just Like That tour will continue through 2023, adding more U.S. shows as well as dates in the U.K. and Ireland. The U.S. dates, which kick off March 10 in Indio, California, include a three-night stand at The Venetian Theater inside The Venetian Resort Las Vegas.

The Sin City gigs will go down March 15, 17 and 18, with Bonnie backed by her longtime band. Not only that, she’s promising fans she’ll be joined by some “special guests.”

As for the rest of the tour, the U.S. shows run through May 23, and then, the U.K. and Ireland legs kick off June 1. Tickets are set to go on sale to the general public Friday at 10 a.m. local time.

The new dates follow a successful year of touring for Bonnie thus far; the legendary performer’s currently headlining a 75-date U.S. tour. She next hits the stage Tuesday night in Melbourne, Florida.