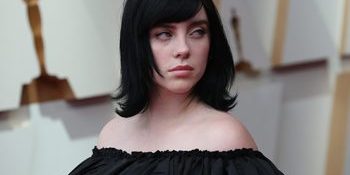 Billie Eilish revealed how she feels about her music being labeled “too dark.”

The singer appeared on Audible’s Origins podcast and said she’s been writing emotional songs “since I was probably 10 or 11.”

The hitmaker recalled being gifted a “little purple notebook” when she was about that age and described how she “would write in it all day long.” Billie recalled filling its pages with “poems and things I was thinking,” as well as “song lyrics … All the first songs I ever wrote were in there.”

“Some of them were very dark and … had a lot of melancholy in them,” she explained, adding she came across that notebook years later and was floored by what she wrote. “I was like, ‘These are very, very upsetting lyrics — and I was 11 writing them.’ I was just willing to write pain,” she remarked.

Because of that, Billie disagrees with some of the criticisms of her songwriting. “The thing everybody said was, ‘Billie Eilish’s music is so depressing and it’s so sad and it’s too dark,’” she recalled. “Have you listened to The Beatles … Lana Del Rey? What the hell?”

She continued, “It was so surprising to me that people thought anything I created was ‘dark.’ … It’s real.”

Billie said the nature of her music allows fans to connect with it on a deeper level. She said fans thanked her for inspiring them to leave abusive relationships.

Because of that, Billie won’t cave to her critics. “It’s really an amazing thing that I can have any effect on people,” she shared. “That’s unbelievable. It makes me remember that it’s really important that I share my pain and my joys, so that it can help people through their pain and their joys.”