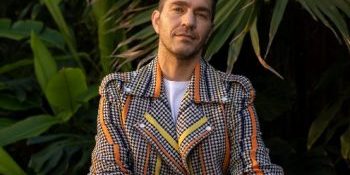 Andy Grammer, who is out with a new song called “Saved My Life,” recently learned he’s the reason one of his fans is still alive.

Andy shared the sentimental story on his Instagram, which he opened with, “Just ran into a fan after a show and we cried together.”

“She told me a few years ago she had tried to take her own life and played a song of mine over and over to get through the night,” he explained.

The “Keep Your Head Up” singer continued, “It just reminded me how connected we are. I didn’t know her when I wrote that song, I was just trying to pick myself up and stay positive. I was dealing with my own s*** and trying to make something beautiful out of it.”

“We sometimes buy into the illusion that we are alone but we are all SO CONNECTED on the deepest levels,” Andy expressed. “When you fight to stay positive, when you look for the good in s***ty situations, when you show up authentically as yourself it has reverberations beyond what you could even imagine.”

The Dancing with the Stars alum closed out the sentimental post with a reminder, which is: “We are all one, a human family.”

Many of Andy’s famous friends supported his inspiring message, including This Is Us‘ Chrissy Metz, DWTS dance pro Sharna Burgess & and Pentatonix‘s Matt Sallee.

Andy is currently on tour with Fitz and the Tantrums as part of their The Wrong Party Tour, which runs through August 27 with a final stop planned in Los Angeles. For the full list of dates and all ticket info, visit either artist’s official website.

The post Andy Grammer cries with fan who said his music saved her life appeared first on Regional Media News.

“I don’t like having hair”: Doja Cat shaves her head and eyebrows
August 5, 2022

Andy Grammer reveals being a “girl dad” changed how he makes music
August 5, 2022