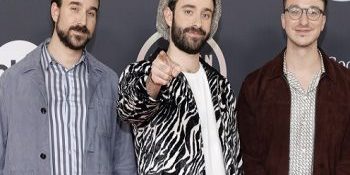 AJR is giving their fans the chance to chat with them one on one this Thursday night.

The brothers cryptically shared an image Wednesday of 11 blurred out lines on top of a word chain that read “= Zoom Password.” The singers captioned the mysterious photo, “The hunt begins Thursday at 7pm ET.”

Fans didn’t know what the brothers were talking about, with some theorizing this was a potential tease of their next album. As it turns out, AJR is inviting fans to chat with them on an exclusive Zoom call that goes down Thursday at 8 p.m. ET.

The trio explained in a Thursday Instagram Story, “The first 300 people with the correct password will be let into a Zoom with us tonight at 8pm, to chat, answer questions, and get a sneak peak [sic] of the music video.  Good luck and we’ll see you tonight.”

They clarified in a follow-up story, “Clues will be scattered across social media to solve the puzzle below” starting at 7 p.m. ET. Fans will be tasked with cracking the code, which is a string of numbers that unlocks the Zoom passcode.

AJR will also release a new song at midnight titled “The DJ Is Crying For Help.” They just put up the YouTube premiere link so you can be among the first to see the video go live.

The news comes shortly after the brothers confirmed they’re already working on their next studio album; last month they told fans on Twitter, “AJR5 is on the way.”