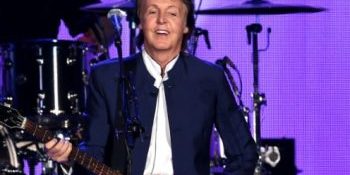 A new documentary about England’s famed Abbey Road Studios is premiering next month on Disney +, and now, fans are getting their first look at it. A new trailer for the film has been released, featuring appearances by Paul McCartney, Elton John, Ringo Starr and more.

If These Walls Could Sing is directed by Paul’s daughter Mary McCartney, who has a personal connection with the famed studios.

“I have grown up visiting Abbey Road, it feels like family to me,” she tells Rolling Stone. “In directing this feature-length documentary, it felt natural to explore the wealth of stories, and unearth so many unheard gems that I had not known about.”

The trailer features a mix of archival footage, including that of the Beatles, along with snippets of a new interview with McCartney and shots of him playing the piano. Elton is also featured sharing, “When you enter a place with so much history around it, it’s kind of sacred in a way.” He adds, “People want to come here. They want the sound of Abbey Road.”