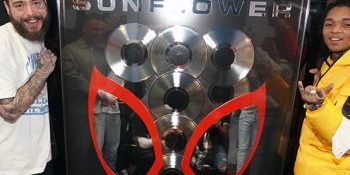 Post Malone and Swae Lee‘s “Sunflower,” which soundtracked Marvel’s 2018 Spider-Man: Into the Spiderverse, is the highest-certified single in Recording Industry Association of America history.

The RIAA announced Monday the Grammy-nominated track was minted 17-times Platinum on Monday. This means it notched its fifth Diamond certification, the most in the RIAA’s history.

This gives Post and Swae the honor of having “the biggest single of [their] generation.”

The two artists were awarded a massive plaque detailing all the records “Sunflower” set on the RIAA charts.

Swae celebrated the honor on his Instagram Story, which sees him posing with Post. “17x Platinum is different, different…,” he said.

Post has yet to react to the good news.

“Sunflower,” which was released October 18, 2018, soared to number one on the Billboard Hot 100 and stayed in the top 10 for 33 weeks. Looking back at all the Spider-Man films, this track is the highest-charting song from their soundtracks — besting Chad Kroeger‘s “Hero,” which peaked in third back in 2002.

Marvel is owned by Disney, the parent company of ABC News.