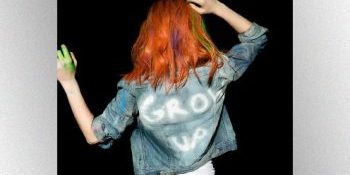 Paramore has changed the cover of their 2013 self-titled album.

The updated artwork — seen on the record’s Apple Music, Spotify and Tidal pages — features a shot of frontwoman Hayley Williams wearing a denim jacket with the phrase “Grow Up” painted on the back. “Grow Up” is also the name of a song on the album.

The original cover was an image of Williams, guitarist Taylor York and then-bassist Jeremy Davis standing together against a black background.

Paramore didn’t formally announce or give an official reason for the artwork change, though it’s probably worth noting that Davis, a founding member of the band, was involved in a protracted legal battle with Williams and York following his departure from the group in 2015.

The album Paramore is the “Misery Business” outfit’s fourth album. It spawned the singles “Ain’t It Fun,” “Now” and “Still Into You,” and was followed by 2017’s After Laughter.