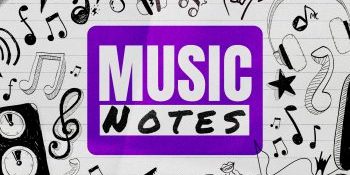 Taylor Swift﻿’s “Anti-Hero” holds steady on the ﻿Billboard ﻿Hot 100, topping the chart for a third straight week. The song was streamed 31.1 million times and sold 327,000 copies — thanks to seven new remixes — over the past week.

If you’re ever feeling insecure about your acne, take a page from Justin Bieber. GQ reports the singer let everyone know he had a breakout when he decided to wear two star-shaped pimple patches — one on his forehead and one on his chin — out in public.

﻿Adele﻿ was hit by a bizarre rumor — ﻿The Mirror ﻿reports the singer has sunk roughly $500,000 into a backstage breathing “bubble” to protect her voice during her residency. Apparently the concern is about how Las Vegas’ hot and humid climate might affect the British singer’s voice.

Nick Jonas revealed the four signs he exhibited prior to being diagnosed with Type 1 diabetes, which were weight loss, irritability, excessive thirst and frequent urination. He hopes his Instagram video will increase awareness.

﻿Katy Perry﻿ has reached the lunch-making stage of motherhood. She told Extra that after doing her ﻿PLAY residency shows she will make daughter Daisy Dove‘s lunches. “I feel so much pride in cutting off the ends of the sandwiches with a full face of, like, sweaty makeup in my robe,” she said. “It’s such a science.”

Harry Styles helped a fan with a gender reveal at his Los Angeles concert. People reports that he helped a fan, who is four months pregnant, find out if she’s painting the nursery blue or pink. “It’s a …,” Harry said while backed by suspenseful drums, “GIRL!” Prior to the reveal he teased the crowd, “I know something you don’t know!”

Ingrid Michaelson teamed up with Keane for a duet of his 2009 smash “Somewhere Only We Know.” You can catch it on Instagram.