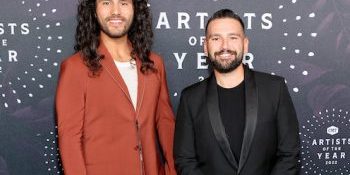 Dan + Shay are helping to ring in the newest class of Grammy nominees. The country duo are headed to Los Angeles for the big reveal, where they’ll perform and present during the nominations announcement livestream.

They’re one of several artists on deck to make the livestream extra special. Cyndi Lauper has also been tapped as a performer and presenter during the stream, and an array of artists across all genres — including Jimmie Allen, repping the community — have been named as presenters for the nominees list reveal.

It’s unclear what Dan + Shay plan to perform during the livestream, but they’ve got three different Grammy-winning songs they could choose from. “Speechless,” “10,000 Hours” and “Tequila” have all won Best Country Duo/Group Performance for different years.

To see whether the band opts for one of those songs, or a newer song like their current single “You,” tune into the Grammys website tomorrow at 12 p.m. ET to watch the nominations announcement.

The Grammy Awards is set to take place February 5 in Los Angeles. The show will broadcast on CBS and stream live and on-demand on Paramount+.