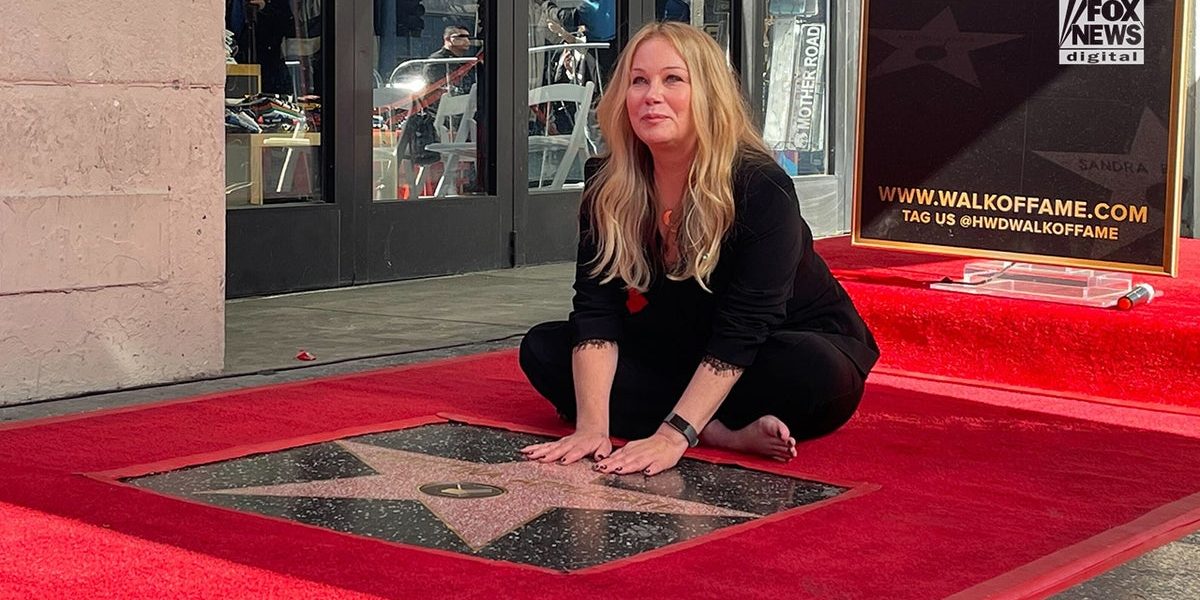 Christina Applegate received her star on the Hollywood Walk of Fame Monday, shortly after announcing her part on “Dead to Me” may be her final acting role.

The ceremony was the first time Applegate was seen out in public since being diagnosed with Multiple Sclerosis in August 2021. To mark the occasion, she sported black nail polish with letters on each finger spelling out “fu MS.”

During her speech, Applegate thanked all of her agents who have worked with her for the past 28 years, celebrating that they’ve been together for so long, a rarity in the business. She said her mother “used to say changing agents is like changing deck chairs on the Titanic, but (she’s) stuck with (hers),” so they are all “going down” together if something goes wrong.

Applegate also started to tear up as she thanked her friends and family for being there for her, especially her daughter, whom she called “the most important” person.

“Thank you for standing beside me for all of this,” she told her daughter Sadie before joking about her MS diagnosis. “Oh, by the way, I have a disease. Did you not notice? I’m not even wearing shoes!” Applegate teased.

While accepting the honor, Applegate explained what a big deal getting a star on the Hollywood Walk of Fame is for her.

“I’ve had a really interesting life, but the life started as being a little girl waiting in line to see the first ‘Star Wars’ on this very street, in that very theater, and looking at these things going, ‘Who are these people? What did they do? Did they do something right? Did they do something wrong? Whatever it is, I want one,'” Applegate recalled. “‘I effing want one!’ I was five years old. This day means more to me than you could possibly imagine.”

During the ceremony, Applegate’s “Married…with Children” co-stars gave touching tributes to the actress, not only complimenting her impressive body of work, but also commending her strength through the many challenges she’s endured throughout her life.

“Humility, humor, fortitude, grace, bravery, I’ve watched you wear it all. You have been high on my list of life’s teachers since you were 16,” Katey Sagal said. “I watched you maneuver the world you found yourself in with maturity beyond your years. Your family health challenges, through some really bad boyfriends, some incredible teenage choices, I watched you. I watched you grow, and no matter what, you kept showing up, for yourself, but also most definitely for those that you loved.”

“I’ve seen you, at the high highs with love and enormous success, coupled with extreme challenges, but you came in with those shoulders and you bear the weight, and you bend, and you don’t break,” Sagal added. “Your humility and your reverence allows all of us to bend with you.”

David Faustino praised Applegate for her body of work, saying she’s had the opportunity “to play some tremendous roles, and played them to a “T,” specifically mentioning “Dead to Me,” in which he said she and Linda Cardellini gave “powerhouse performances.”

In a recent interview with Variety, Applegate revealed her role as Jen Harding in “Dead to Me” could potentially be her final acting role due to her ongoing battle with MS.

“Jen Harding is the one, who — who knows, quite possibly the last one I’ll play. With my disease, I don’t know how capable I am,” Applegate said.

Applegate recalled learning of the diagnosis while working on the show’s third and final season and having to let everyone know. She explained from then on filming became all about learning what she was able to do and adapting to her different needs, such as needing to film in cold environments.

“If I called them in the morning, and was like, ‘Guys, I can’t get down the stairs,’ they were like, ‘OK! We won’t do today. We’ll do other stuff.’ Netflix even let us take a break for a couple of months so that I could mourn, and find treatment,” Applegate said.

Due to the unpredictability of her disease, Applegate is unsure if she will ever act again, saying it depends on “what I’m capable of doing.”

“I’m pretty convinced that this was it, you know? But who knows — I’m probably gonna get real bored of being in my room,” Applegate said.